It’s become a familiar image on our TV screens – an ambulance is parked on a street, with its red and blue lights reflecting in the window of a night club or bar. Someone is lying on the ground, knocked unconscious, with emergency crews surrounding them.

The media has been a platform for discussions about ‘King Hits’ and ‘Coward’s Punches’, especially in the last year. Many people are asking what’s to blame for the unnecessary tragedies we’ve heard about – is it alcohol?  Our hyper-masculine culture? Our legal system? Or are boys ‘these days’ just out of control?

Whatever the answers are, young men and violence continue to be closely associated with one another.

But it’s an association that doesn’t have to exist.

For SU QLD, it’s about providing young people with a person to help them navigate emotions and find positive outlets to express how they are feeling. It’s hoped that this will help some young men develop good habits that will last into the future.

Our chaplains and at-risk facilitators are in unique positions to work alongside boys and give them the tools to manage their anger. It’s not about a program that provides a ‘quick fix’ or that magically transforms students – we’re talking about long-term relationships being formed, so boys can build up trust and share why they are angry.

Sunshine Coast Chappy, Stuart White, has been working as a chaplain for seven and a half years.

“Teenage boys have always had a tendency to be less in touch with their emotions and less willing to talk about what’s going on in their lives. Now, more than ever, there are heaps more pressures on young people. It’s relentless,” Chappy Stuart says.

Stuart runs some fantastic programs – including Russian Strength Training (RST) and Rock & Water – aimed at increasing boys’ self confidence and teaching them to think before they act.

“RST is a fitness-based program to get boys out of the classroom and develop their strengths. As they push their bodies beyond what they are comfortable with in fitness and exercise, students realise they can do more than they thought. That’s huge for boys, particularly boys who don’t learn well sitting in the classroom. They may not do the ‘academic stuff’ well, but when you give them practical things to do, then it boosts their confidence,” Stuart says. 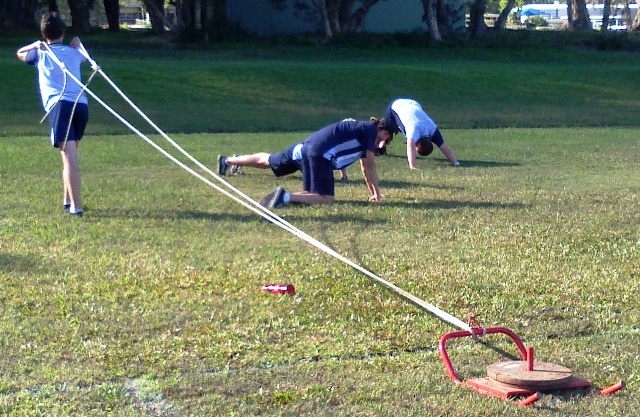 “The program usually involves completing a different fitness unit each term, over a year. The units increase in difficulty as boys’ strength increases over the year. Activities include things like free weights, boot-camp type training, and kettle bells.”

Stuart also runs Rock & Water with all Year 8 boys.
“The whole premise of Rock & Water is that young men sometimes need to be a ‘rock’ in their attitudes and responses – there are some things that are worth having a ‘rock’ attitude for, and that means being steadfast and secure. So we talk about what sort of situations that might include, like when they’re standing up for a cause. Our ‘rock’ motto is: I am not a wuss; I will defend myself if I have to; I know what is worth fighting for; and I am in control.

“The ‘water’ attitude is about letting things flow by that don’t matter. Water is malleable, it can be directed in different ways, and it is flexible. We talk about that in life, and how having a ‘water’ attitude might actually service us better.

“The water motto is: My first intention is communication and friendship. So before I go to a ‘rock’ attitude, I’m first going to extend friendship and try and communicate with the person.”

Stuart says it can be challenging working with young boys because some have built up walls. “But those walls begin to come down as you consistently reach out and are available. It’s not about expecting anything from them, or trying to change them, but just being there.

“And that relationship doesn’t stop when they finish school. Boys who I’ve worked with over the years, and who are now in their 20s, often text or call me when they’re struggling in life. Even though it takes a while for walls to come down; once they’re down, you are part of their lives forever. To be part of that ongoing journey with them is a privilege,” Stuart says.