Like many chaplaincy programs, volunteers form the backbone of Chaplain Lindsay Kliendienst’s formerly named Boys and Bikes program over at Aspley State School. Their importance to the success and expansion of his program cannot be understated and Lindsay knows this.

“I’ve had to put a cap of 10 students in each group. If I get more volunteers, I could expand that but I don’t have any more consistent volunteers who can offer to be there every week,” Chaplain Lindsay explains. 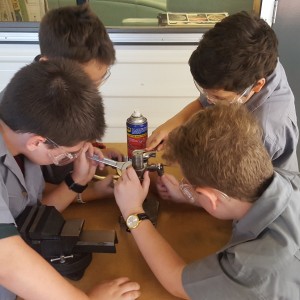 This Boys and Bikes program, which has expanded to include various other materials, was developed by Chappy Lindsay to be a boys mentoring program for the male students at his school.

“It’s a hands-on, practical type of program. A local business that supports chaplaincy donated tools and then local bike shops provided some old bikes for the boys to work on. And we would show the boys how to take the bikes apart and service them, and then how to put them back together. As the program grew, we’ve moved into other areas. For example, we showed them how to service a lawn mower and then gave them an opportunity to try,” says Lindsay.

“It’s primarily a boys mentoring program. The sole purpose is to give the boys some positive male role models…It’s continuing to grow to the point where we now have a waiting list of students and we’re going to expand the program in terms of what we do and how we go about it.”

The motivation behind this initiative is where its value lies. Lindsay was trying to find a way to make his role more streamlined as the high demand for his services meant that he would potentially have to either turn young people away or shorten his time with everyone else. Understandably, neither of those options would be adequate, so Lindsay had to be creative.

“I was working one-on-one with several boys, three boys in one year level, whose fathers had passed away. There was a bunch of other boys who had been referred on to me for male role modelling because their parents had gotten divorced, or they didn’t have that sort of male role model at home. There was no dad, no granddad, no uncle or brother. So I would just encourage them and speak into their life or even show them that this is how a mature guy acts and lives. As my pastoral care load was beginning to build, it got to the point where I thought I’ve got to find a better way to do this – a more efficient way,” he says.

“So this program was birthed out of this need. I thought to myself that they’re all dealing with a lot of the same things so why don’t I put them all together.”

And as Lindsay explains, this had fantastic, unexpected consequences. 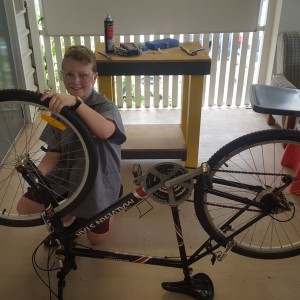 “As a result [of this constructive group environment], they all support each other now as well with some of the things they have in common.”

On top of this supportive group activity, Lindsay has seen an improvement across the board with the majority of boys who attend.

Chappy Lindsay has always had a passion to help young men deal with difficult life circumstances, spurred to action after first being exposed to institutionalised young people in juvenile detention.

“I used to work as a locksmith and my boss assigned to me to take care of the locks at the local juvenile prison. The first time I entered the juvenile prison and saw the way these young people acted and lived, and what it was like for them in juvenile prison – which was reinforced for me every time I had to go back in – I realised that the system isn’t working. There are a lot of problems out there that aren’t being dealt with and there are so many kids out there who are missing opportunities in life. They’re being hard done by and there’s no one out there who’s willing to stand up, put up their hand and say ‘I am going to do my best to make a difference in your world to give you the best chance you have to be everything you can be’.”

We need your support to help chaplains, like Lindsay, run their life-changing programs!

Please call 1300 478 753 or email info@suqld.org.au for more information about how you can be involved.