Christmas is a special time of year, full of celebrations, food and family. But for Kim and her grandsons, last Christmas was when their world turned upside down.

“The house we’d lived in for eight years was sold underneath us, all of our furniture had to be put in storage and we were technically homeless,” says Kim.

“We moved to be nearer to him but this meant the boys had to leave the school they’d been at their whole school lives.

“At the time, nobody knew what was going on. Furniture removalists showed up and the kids were asking, ‘Nan, what’s happening?’ It was just awful,” recalls Kim.

Even though Kim and her grandsons were going through some massive life hurdles, thanks to you, there was a glimmer of hope just ahead.

A few months before, Chappy Julie nominated this precious family to receive a Christmas hamper as part of an initiative that St Andrews Hospital was running. There was just one problem. By the time Chappy found out that Kim’s family had been selected, they’d already moved to Wollongong.

Undeterred, Chappy Julie knew she had to find a way to get these gifts to the family. A road trip with a teacher turned out to be the solution.

“We arranged to meet halfway in Port Macquarie. We stayed overnight, and in the morning handed out the gifts along with some extra cash and a card from the workers at St Andrews – it was really beautiful,” says Chappy Julie.

“Kim is the sort of person who does everything for everyone. She’d never ask for anything, so being able to be there for her and the boys was really special.”

It’s because of you that Chappy Julie was in place to drive nearly 10 hours to share the Christmas spirit with Kim and her grandsons. Thank you! 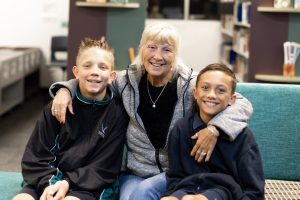 For Kim, this gesture of kindness went above and beyond her expectations of the role of a chappy.

“I know it’s a job, but Chappy Julie goes above that. Even when I was doing it really tough in NSW, she’d call to check in and ask after the kids.”

“There just aren’t any words to describe it. Even now, a year later, I still can’t believe it. What Chappy and the team did for us brought a bit of human faith back,” says Kim.

24 hours before the borders closed in late March, Kim and her grandsons made it back up north, and are now happily settled into their school community once again. Chappy Julie, of course, is thrilled to have them back!

Thanks to kind-hearted supporters like you, families like Kim’s have someone looking out for them when times are tough. Please keep this vital work going. Visit suqld.org.au/donate.

Chappy turns back the clock to bring hope during covid

Why do I celebrate NAIDOC Week?

Chappy turns back the clock to bring hope during covid

Why do I celebrate NAIDOC Week?