Shakira’s story with chaplaincy began when she was a little ‘preppie’. She’d just lost her cousin after a terrible accident. Too young to make sense of the tragedy, she found comfort spending time in the Chappy Room at Alexandra Hills State School.

Through your support, someone was there for Shakira in her time of grief and confusion – Chappy Terry.

By Grade 4, Shakira had discovered a passion for helping others in times of need. Inspired, Chappy Terry awarded her with a badge and the title ‘Chappy Helper’.

Now in Grade 10, Shakira is still actively involved with her old primary school’s chaplaincy program, and is grateful for Chappy Terry’s encouragement all those years ago.

“It’s hard to sum up how much chaplaincy has made a difference in my life. It’s lovely to know there’s a safe space in the school where there is a person or a group of people who you can rely on,” says Shakira.

“As a Chappy Helper, I would run little games at lunch, monitor the younger children and make sure everyone was okay and having a good time. I really enjoyed getting to know people from other grades, and being recognised around the school as someone they could go to if they needed help.”

Shakira reflects that being a student visiting the Chappy Room was quite different to being a Chappy Helper, but some things stayed the same. 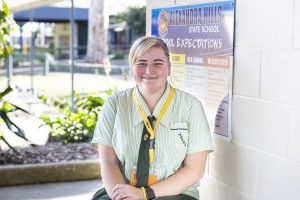 “I would talk to Chappy Terry about anything I felt concerned or upset about, particularly with friendship issues. People can be a bit nasty, and Chappy Terry would encourage me to think about the situation from a different perspective,” says Shakira.

“Later, I really loved being a Chappy Helper because it gave me a platform to help others and share how Chappy Terry helped me.”

Chappy Terry recognised Shakira’s natural gift for leadership, and was blown away by her willingness to get involved.

“Ever since she was young, Shakira has always been such a strong supporter of chaplaincy. It’s so wonderful to see that the connection to chaplaincy doesn’t fade – that these young people still feel comfortable popping back in even after they’ve left,” says Chappy Terry.

“Shakira comes in to say hello and bakes a chocolate weet-bix slice as a sweet treat for the students at our Friday Chappy Breakfast. She has a beautiful story about how powerful chaplaincy has been for her. ”

Thanks to your generous support, students like Shakira are journeying past the pain into a bright future, knowing they have someone by their side every step of the way. Your support makes this possible. Visit suqld.org.au/donate.