The performing and visual arts camp for high schoolers, which has attracted up to 120 campers and more than 50 leaders, has united and inspired creative young people around the state and, for some, was the one place they felt safe to be themselves.

“The campers who have experienced really tough lives are the ones that stick with me,” says Deb Runham, who was SMADD camp director for the last 15 years before passing the baton on last month.

“I am so aware that SMADD provides them with a safe place where they are accepted for who they are and loved unconditionally. It’s their safe place and that is a beautiful thing about camps.” 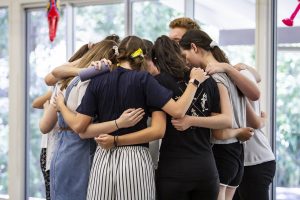 Deb said SMADD had helped change campers’ lives for the better for the last 40 years.

“…or Jesus uses SMADD to change lives would be the accurate explanation,” she said.

“SMADD is a place where they get to be their amazing creative, unique selves and they are celebrated for it because our leadership team knows that God loves them for it and those leaders make sure our kids know their value and worth.

“SMADD shows them love, and love impacts you.”

Camper and drama student Shayanna Walker, 13, knows that to be true.

“It’s a positive vibe, so you’re always uplifted, even when you do the wrong things in your performances,” she said.

“I love learning all the different techniques and what we can do to put what we’ve learned about God in the pieces.”

The camp has been held in many locations since 1979, including Mt Tambourine, Warwick, Redcliffe, Dakabin, Mapleton and Burleigh Heads with Alex Park Conference Centre on the Sunshine Coast being our home since 2011.

Deb has attended a grand total of 31 SMADD camps.

“I first learnt about SMADD through my high school chaplain, Tony Salecich. He and his wife took a van of kids from Yeppoon and Rockhampton to SMADD each year and I attended my first Summer SMADD in 1993,” Deb recalls.