A presidential campaign and election in a country far, far away has been dominating our news feeds.  Amidst the drama of this world-impacting, democratic process, you may have missed a less publicised movement.  Make Empathy Great Again, commenced in the lead up to the 2016 US election and is a small, but expanding movement/operation. Both campaigns aim to make a difference. I wonder if we were to compare the potential long-term outcomes, which would be the most world changing?

You may ask whether empathy ever stopped being great or has it just disappeared from view. In the Gonski-Growing Up Digital Study*, 80% of the almost 2000 Australian teachers and school leaders surveyed, reported student empathy has declined over the last five years.  This statistic means the majority of our country’s classrooms and playgrounds have been impacted. In a time when our young people would benefit from more rather than less understanding, maybe it’s time to Make Empathy Great Again.

Empathy is the ability to feel with someone, it’s about creating connection that leads to compassion.  It’s a skill that can be modelled and taught to young children and according to Brene Brown*, also mastered in adulthood.  It is different from sympathy, which is feeling sorry for someone else.  Empathy improves relationships, reduces conflict and is essential for good leadership.

Screen time is up, face-to-face time is down. Competition has become a lifestyle, and our culture of offence and blame are some of multiple explanations for declining empathy.  It’s worth reflecting on these causes, as is Making Empathy Great Again, by modelling, encouraging and deliberately creating opportunities to develop it as part of family life. As in most learning there will be setbacks but practicing empathetic responses can only happen in relationships.

Here are three areas that might be worth focusing on.

The weight of a problem lessens when we sense we have been heard. Being aware of our own feelings and thoughts as we pay attention in conversation is important to really listening.  Being curious without trying to fix someone, recognising and tuning in to the other person’s feelings and checking for meaning can be encouraged in general conversation, after school debriefs and while reading books or watching movies – particularly those with some emotionally charged moments. Modelling and explaining the aspects of empathetic conversation with our kids will give them real tools they can use in relationships outside our homes.

Conflict is often the reason students visit my chaplaincy room.  Rather than lecturing and expecting reluctant, meaningless apologies, I’ve noticed the transformation that occurs as I start by acknowledging the pain and how difficult it is to get along. Next, I encourage kids to consider how their own feelings may have influenced the way they acted and then I ask them to listen to the perspective and feelings of the other person. Often this leads to the realisation that they were actually trying to achieve the same thing.

As a parent, I realise the times I have blamed or lectured my kids for fighting with their siblings may not have been the empathetic modelling they needed.

Jesus spoke about inviting those in need to our dinner table. This could be the elderly neighbour, the family with a different cultural background, or the isolated single parent of the “class behaviour problem,” among others. When we have opened up our home, I have at times, struggled with my own attitude while simultaneously learning from people who I presumed had not much to teach me.  I have fielded complaints from my kids, “Do they have to come over?” It has at times been inconvenient and out of my comfort zone and it has grown empathy.

In Romans, Paul wrote, bless those who persecute you—bless and do not curse.  Rejoice with those who rejoice; weep with those who weep.  Live in harmony with one another; do not be proud, but associate with the lowly. It sounds like a way to Make Empathy Great Again! 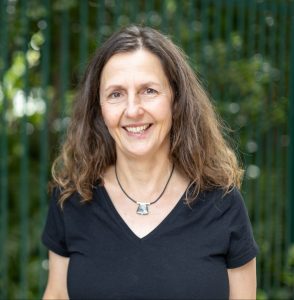 Andrea is a former secondary school teacher and counsellor. She has worked as a school chaplain for over 19 years and now also serves part-time on SU QLD’s Children and Youth Program Team, delivering training and professional development to chaplains and youth workers. Andrea and her husband are parents to three adult children and grandparents to two.