Some boys grow up believing a lie; that to be a man you have to show you’re tough – not to be messed with.

They believe their reputation for this type of ‘toughness’ is the only way. Ultimately, it’s a way of thinking that can lead them on a path of self-destruction.

Thankfully there is another way…

This year SU QLD’s Footy Camp is celebrating 10 years of life-transforming moments where scores of young men have discovered this ‘other way’.

You helped make this possible.

“This camp has always been about having a lot of fun with lots of activities. But it’s also a great opportunity to share our faith with these young men, together with leaders from the local community and local churches,” says camp founder and SU QLD Field Development Manager, Troy Wilson. 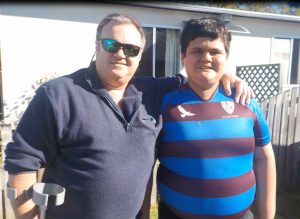 Some of the young men that attend the camp come from backgrounds where they’ve been in trouble at school for fighting, but as Troy explains, that’s only part of their story.

“They’ve grown up with this expectation that they’ve got to ‘man up’ if someone puts them down. And the only way to man up is with your fists. For them, the most shameful thing you can be called is weak. It’s unbearable.

It’s a complete revelation for some of the campers.

“I remember a chat I had with one young camper, where I said, ‘if you keep on the path you’re on you could find yourself in trouble with the police or even end up in jail’. Then he looked up at me and said, ‘my brother’s in jail because of this’. It’s like it suddenly hit him.”

Together with fellow camp founder, Tala Aufai, Troy has created a culture at Footy Camp based on the three pillars of footy, faith and family.

“We’ve seen the boys really benefit from having that experience of feeling welcomed and loved and that celebration of doing your best, whatever that may be. For some of the boys it was their first experience of being part of a team and they loved it,” Troy says.

One of the highlights for Troy has been seeing young boys, who struggled to find acceptance in the outside world, come along to camp and thrive in that atmosphere of love and acceptance.

One such story comes from a young camper, Cameron, who’s on the autism spectrum and attends a local special school in the western suburbs of Brisbane. He’s a big footy fan, but has had some bad experiences trying to join teams in the past. At Footy Camp, that all changed.

“Having Cameron on camp was such a blessing. He is such a likeable kid. He loves telling jokes and I just loved how all the other campers took him under their wing,” Troy says.

Throughout the camp Cameron kept saying, ‘I’ve never scored a try before. I really want to score a try’. After some reassurance from his fellow campers and leaders, Cameron’s moment to shine would come during the final game on camp, with his dad in attendance.

“Towards the end of the game, Cameron’s team passed him the ball 10 metres out from the line and he bunted off a couple of tacklers and went over to score. The place just erupted. Even the other team celebrated with him. It was just this awesome moment,” Troy recalls.

Thanks to Troy and Chappy Tala Aufai for an amazing 10 years of footy, family and faith at SU QLD Footy Camp.

And a big thank you to supporters like you who are changing lives for good through SU QLD’s camping ministry*.

*Gifts to SU QLD Camps are not tax deductible.