Chaplain Sarah Petchell is a woman of many talents – a good listener, a supportive and caring presence, and an international level powerlifter. For those unfamiliar with the sport of Powerlifting, Sarah describes it concisely. 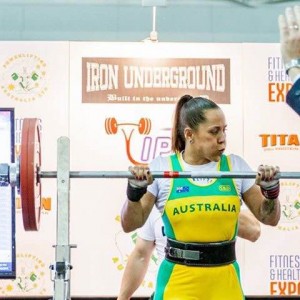 Sarah has managed to achieve some incredible results so far in her competitive career. Incredibly, she is now the leading powerlifter in Australia in her weight class.

“This year I finished 2nd in Australia in March. I moved into 1st place in July and was then selected in the Australian team to go to Canada in December, this year, where I will be wearing the green and gold and competing on the world stage.”

Whilst the combination of chaplain and powerlifter may initially seem like an odd mix, Sarah is a testament to how a passion for chaplaincy and powerlifting can complement each other.

“I believe in pursuing things not only for yourself but for the benefit of others, if in some way what you are thinking of doing or pursuing can be used to reach people, build others up and be an example of God’s great nature and gifts then it is worth doing and worth doing well.”

Sarah has managed to balance the often hectic workload of a chaplain with the constant training needed to perform as a competitive powerlifter.

“Chaplains need to be organised, juggling many different roles and responsibilities, we get good at doing a lot and having a full schedule. I have been able to fit my training in around my responsibilities, but there is sacrifice.”

“It’s a battle that you can only win if you’re truly committed to the things you are doing. As a chaplain, every part of who you are can be something to draw on to engage with people and I have been able to use my powerlifting to engage with children, parents, staff and the wider community.”

Getting to such a high standard of competition has been years in the making for Sarah, and her commitment to her sport has been rewarded by getting to represent Australia on the world stage. During her time in the defence force, before transitioning to chaplaincy, Sarah encountered powerlifting while training for Rugby Union competition.

“I started powerlifting after being introduced to the specific lifts though my involvement in CrossFit in 2012. I was playing Rugby Union for the Army and Defence Force and looking to improve my fitness. I found myself to be naturally strong in these three lifts and I discovered that powerlifting was its own sport.”

We wish Sarah every success in her school and as she travels to compete on the world stage.