The small town of Blackwater in Queensland’s Central Highlands may be known for coal mining, but a local school chaplain is uncovering some real hidden gems too!

These gems include a shy, skinny outsider, who is now a basketball prodigy, plus scores of directionless young boys and girls, who are now young men and women with hope for a brighter future.

For the past four years, Chappy Anita’s basketball program at Blackwater State High has been giving local youth hope and confidence to achieve successes they never thought possible.

“Clinton has come so far. He’s a very shy kid. He normally would spend a lot of time on his own, but this has really just put him out there. His personality’s changed. He’s grown into a much more mature person and a better person because of what Anita’s done for all the kids,” explains Clinton’s mum, Vicky.

Chappy Anita launched the program as a way to better engage students, but for many of these young people, it’s become a life-changer.

“It started when I first became a chaplain at Blackwater. I had the idea to do a ‘Hoops’ competition… One of the students came to me and asked me if I would start a basketball team and coach them,” she recalls.

For Clinton, who graduated last year, he was given the platform he needed to unleash his potential during a trip with his team to Toowoomba for a Super Camp in his second year.

Anita remembers this as the moment she noticed his tremendous natural ability.

“He just really had a passion for the sport. He trained and trained. We noticed him getting better and better because of that training. And we’ve been able to expose him to a wide range of coaches, where we’ve raised funds to get other coaches in to do ‘Skills Comps’,” Anita says.

One such coach was former assistant coach of the Australian Olympic Basketball team and 3-time NBL Coach of the Year, Brian Kerle, who has subsequently signed Clinton to the Brian Kerle Basketball Academy in Brisbane. 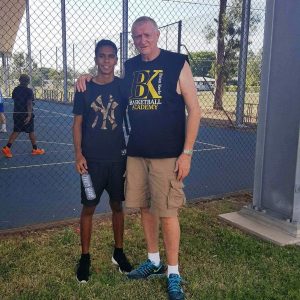 “Someone said to me that Brian ran an academy and that I should try and see if I could get Clinton into that. So I just ‘googled’ him and rang him, and we started a great friendship from there,” says Anita.

While giving young people like Clinton a chance to showcase his talents is extremely satisfying for Anita, she is equally as proud that her program has played a pivotal role in supporting at-risk local youth.

“There’s been two students, who finished with us and graduated last year, who probably wouldn’t have finished school if it wasn’t for this program. Basketball has given them something to belong to. It’s also given them hope for a future,” Anita says.

But it’s not all fun and games. Anita makes it clear to her charges – no school, no play.

“If we need to buy them groceries to [get them to school], then we do that. It’s about supporting them where they’re at, to be able to achieve and work into adulthood.

“We’ve had students from all walks of life, from broken homes and young people who’ve been through the youth justice system, who’ve made real changes in their lives.

“It’s great for the role of a chaplain. Not just to connect with the students, but their families as well. I think it just highlights that there’s a need in all different socio-economic areas, across different cultures and suburbs.

“And basketball is just the most amazing sport where it brings all of that together. As a team, we’re a family. That’s our motto. When you join the team, you become part of our family, and family sticks together and we support each other.”

You only need to talk to Clinton to hear what the Blackwater High Basketball program means to him.

“It means everything to me, really. I made so many good friends [during my time here].”

SU QLD school chaplains need your support to continue creating programs targeted to the needs of their community.

You too can change lives. Visit suqld.org.au/donate.