Winter Mapleton is a camp buzzing with the warmth of fellowship and meaningful connections – including with the one who matters most, Jesus Christ.

From humble beginnings in 2008, this year the camp celebrated 10 years of warming hearts and changing lives.

Filled with activities designed to help campers step out of their comfort zone in a safe, loving environment, Winter Mapleton is a testament to your generosity – supporting more than 800 campers in Grades 4, 5 and 6.

Campers like, 18-year-old Lincoln Mellorse, who has been involved with Winter Mapleton since 2010. Following in the footsteps of his older brother, he attended camp as soon as he was old enough, and years later returned as a leader.

“Even though I finished as a camper in 2012, I always find myself coming back to SU camps because of the loving environment,” Lincoln says. 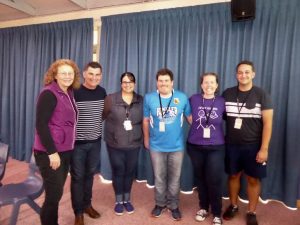 “The leaders are a big part of why camp thrives. They build genuine connections and serve as great role models for the campers. The impact of my leader, Peter, was what inspired me to become a leader myself.”

Serving as camp director for eight years, Rachel says what drew her to Winter Mapleton was the connections formed between campers and leaders.

“The vision of camp is a place of fun and connection. But it’s also a place where young people are introduced to God, and where they get to see what being in a relationship with Jesus looks like,” says Rachael.

“It’s an environment where young people feel special and included.”

For Rachael, Lincoln’s story is living proof of that.

“Seeing Lincoln grow in his confidence and his ability to lead is amazing. His journey is such a reminder that it is not just one person or one organisation that makes a difference – it was those connections between his youth group and his involvement in a variety of SU camps that led to where he is today.”

Ten years on, Winter Mapleton is thriving. It’s a week of fellowship for campers, and a place of encouragement for leaders.

This valued ministry is a testimony to your generous support, and we thank you.

SU QLD also recognises the contribution of all the leaders, campers and volunteers who have made Winter Mapleton Adventure Camp such a success. Particularly, we’d like to thank the camp directors: Jenni Dobbin, Jeff Howard, Rachael Pickard, Beck Holloway and Samuel Henley for their incredible input and sacrifice into the camp.

It’s through your support and God’s favour that young lives like Lincoln’s continue to be impacted for good.