Halloween is a big deal in my community. Each year, we have a huge Halloween community event, with a parade, performances, rides and food. It’s easily the biggest event in our local calendar. But this hasn’t always been the case. The enthusiasm for Halloween seems to have grown quite dramatically over the last few decades in our area.

I remember when I was in Year 7 (almost 40 years ago now), I went trick or treating up and down the street with my friend and most people weren’t prepared for us at all, with many having no idea that it actually was Halloween night. We didn’t fare that well in terms of treats and I don’t think we played any tricks. We didn’t bother heading out the following year…

Halloween’s origins are believed to go all the way back to a Celtic festival that celebrated both the harvest and the change of season towards the colder, darker half of the year. It was believed that during this night, the boundary between the physical and spiritual worlds would blur, resulting in heightened interactions between the living and the dead.

The festival morphed over time, influenced particularly by the Roman Empire and the Christian Church in the early centuries of the Common Era, but it’s clear that certain elements from these early expressions have stayed with us up until this day, for example, people might not wear disguises today to evade the dead’s trickery, but they still enjoy a good, spooky dress-up.

It’s been a long time since Halloween has been taken seriously as a genuine commemoration of the blurring lines between the physical and spiritual worlds.

For well over a century now, it’s been considered more of a community holiday where people get together for a party, to eat too much junk food and to freak each other out with spooky costumes, rubber masks and scary costumes. It’s supposed to be fun. I guess that’s why it’s grown in popularity over the past decades.

However, I do know people who aren’t sure about Halloween and whether it’s right to participate in a festival with seemingly such dark and unwholesome themes.

I have some sympathy for that view. I don’t love Halloween for some of those same reasons and I don’t usually go out of my way to get involved. But despite myself, I can’t help thinking that Halloween provides an opportunity to look not just at the darkness, but to look through it and see the light on the other side.

There’s a great verse in the Bible that says, “The light shines in the darkness and the darkness has never put it out.” (John 1:15 GNT)

It makes we wonder if I’ve failed to see the light that sits beyond the apparent darkness of my local Halloween celebration. Sure, there’s darkness on the surface. There’s lots of skeletons, zombies and scream masks, and people are certainly enjoying the shock factor in all that. But at the heart of it, people are getting together to have fun with their neighbours and friends. Surely there’s light in all that, brighter than the apparent darkness…?

So, maybe this Halloween, I won’t avoid the big community event like I usually do, even though it’s not my thing and aspects of it don’t sit completely right with me. Maybe I’ll join in and look for the light that is there under the surface. Maybe I’ll even try to be part of the light of the occasion.

Perhaps I’ll go as an angel.

Just to be sure… 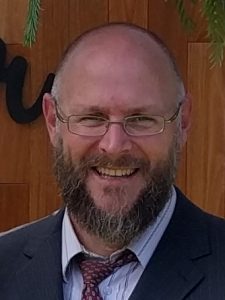 Steve has over 30 years experience in school, community and church-based youth work. He is currently working as the Training & Development Manager at SU QLD, overseeing teams that deliver training and produce resources for SU QLD staff and volunteers. He holds post-graduate qualifications in Social Work, Politics & Government, and Christian Studies.