Behavioural optometrist, father of three, grandfather of one, foster father to many, and
champion for victims of domestic violence, Sunshine Coast dad Darin Browne is your 2018
Queensland Father of the Year.

Darin’s daughter, Tara, nominated him for the award to recognise him for his dedication to
his family and helping others in need. 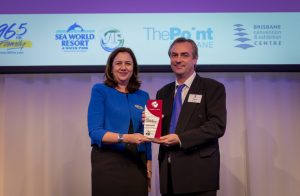 “For as long as we can remember, dad has juggled full-time work with a busy schedule with
a number of charity and volunteer endeavours but he never let that interfere with the
quality time he gave his kids,” Tara said.

“He has been a foster parent to children and teenagers for over 25 years. He is one of the
founding couples of Lily House, which is a home for young mothers and infants fleeing
domestic violence, homeless women of all ages, and pregnant young women.

“We know he loves us dearly and we can always rely on him to be there for us, no matter
what happens in life.”

As for the man himself, he was keen to share a message for all dads.

“Spend quality time with your kids, not just time where you’re physically there but your
mind might be elsewhere. I want to challenge every Queensland father to step up and love
your kids unconditionally,” he said. 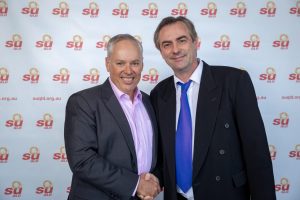 Darin was one of four regional finalists for the 2018 Queensland Father of the Year award, which
was announced at a special gala luncheon in Brisbane recently. The ceremony was attended by a
host of SU QLD supporters and dignitaries, including Queensland Premier Annastacia
Palaszczuk, Deputy LNP leader Tim Mander (Everton), Mark Robinson (LNP Member for
Oodgeroo), and former Fathers of the Year, Jeremy Lange (2017) and Mark Cummins
(2012).

SU QLD is grateful to once again host this prestigious award and to shine the spotlight on
some of the unsung heroes of our local communities – our super dads.

As the 2018 Queensland Father of the Year, Darin and his family have won 5 nights’
accommodation at Sea World Resort and Water Park.

If you know a super dad, who deserves to be recognised, keep an eye out for when entries
for the 2019 Queensland Father of the Year open in April next year – or better yet follow
us on Facebook for your healthy dose of inspiration, dad jokes and much more…