There is more to school chaplains than high fives, games of handball, running programs and connecting with children and young people. Sometimes they win awards for being amazing in other ways.

“My SQN went to a dinner a few weeks ago, and I thought I was just going to catch up with friends and cadets I’d trained,” Chappy Ryan recalled.

“There were different awards throughout the night, and when my name was called for Airman of the Year, I was actually in a bit of shock. I was very surprised. I didn’t even know I had been nominated. It was all very surprising and I felt honoured, too. 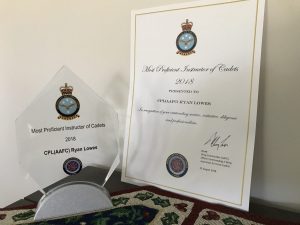 “Due to participating in numerous General Service Training (GST) camps, and promotional courses for cadets to learn how to be young leaders in the AAFC, the powers that be saw fit to award this to me, because of what I’d been doing at a squadron level, and at a wing level within 2WG. So they thought that I would be a good choice for Airman of the Year.”

Chappy Ryan, who has been at the school for nine years, was originally introduced to the AAFC by a former student in 2011.

“I got into the AAFC as hobby becoming a civilian instructor, but made the decision to go into uniform the following year and became a uniformed instructor, and it just went from there and I’ve been in the Australian Air Force Cadets ever since,” he said.

Do you know a superstar chappy?  We’d love to hear about them! Email stories@suqld.org.au