When you’re a teenager, you want nothing more than to feel accepted, part of the crowd. So what happens when you’re made a social outcast… rejected because of a physical condition?

Senior Pastor of Bribie Island’s Transformation Centre, Rob Henry, knows this feeling all too well… because this experience almost cost him his life.

And if it wasn’t for Chappy Christian, he’s certain it would have.

A popular and athletic student in primary school, young Rob enjoyed every activity that was on offer. Attending a small state school on the outskirts of Bundaberg, Rob was involved in all aspects of school life.

His family left for a few months travel, so Rob left school a month early, and when he returned to start high school, his friends didn’t recognise him.

“Hitting puberty, I was diagnosed with a condition called Cystic Acne,” says Rob. “It’s an intense form of acne, to the level of cysts. It got so bad that it hurt to lay down in bed at night. The primary form of treatment was antibiotics, but it also involved using steroids. One side effect of steroids is that it causes you to put on a lot of weight,” Rob says.

“So I went from being this really athletic kid who was popular, to going back to school after our travels as an overweight kid with severe acne.”

Making the transition to high school can be hard at the best of times, but for Rob, it was almost unbearable. With no friends and no confidence to make new ones, he felt completely alone.

The constant name-calling began to take a toll on young Rob’s mental health.

“As you can imagine, that isolation led to an extensive amount of depression. It got to the point where I attempted suicide. I wasn’t successful, but at the end of Grade 9, I couldn’t take it anymore and I decided I would try again. I remember it was a Friday. I went to school that day thinking I would go through the motions one last time and try again that night.”

But unknown to Rob, Chappy Christian would supernaturally change his life that day… 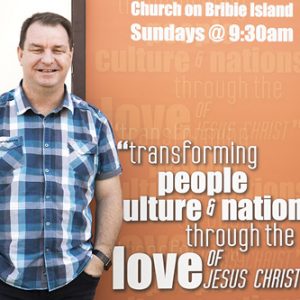 “At the gate of the school leaving that day, was the school chaplain. Chappy Christian just felt like he was supposed to meet me there that day. And so he just befriended me from then onwards, and we would spend most of each day together,” Rob recalls.

From that brief meeting, and the friendship that followed, Rob’s life was saved. And Rob is certain of who is responsible for that transformation.

“Chappy Christian made a difference. He got me connected and helped me make some friends. He brought perspective back into my life. Honestly, I credit Chappy Christian with me still being alive.

“I don’t know for sure whether I would have been successful [in ending my life] that night but by his actions that day and being led to be there for me, meeting me at the gate, Christian prevented that.”

Not only did this bond with his school chaplain save Rob’s life, but it also allowed Rob to discover the clear direction that he wanted his life to take.

He became a school chaplain on Bribie Island for five years, before moving into his current profession in church ministry.

“It’s been my life’s goal since then to be that inspiring person for someone else. That was my passion and drive when I went into chaplaincy. Even if I only reached one kid in the five years that I was a chaplain, I wanted to be that for someone else.”

Your support made Rob’s incredible transformation possible. Thank you!